Metro Transit is planning new routes in the METRO Bus Rapid Transit (BRT) network. Join Council Member Kevin Reich, who represents the city on the Transportation Advisory Board at the Met Council, and Metro Transit outreach staff for a virtual community forum to learn more about the proposed routes and Metro Transit’s Network Next planning initiative and help prioritize implementation of the next BRT line.

Join on your computer or mobile app

Or call in (audio only)

Three of the four alignments that have been identified for near term implementation run through or adjacent to the First Ward: Central (Route 10), Como/Maryland (Route 3), and Johnson/Lyndale (Route 4). Through January 20, community is asked to rank the top alignments to help prioritize implementation using an online survey: surveymonkey.com/r/futurebus. Once prioritized, the corridors will be designated as the future METRO F, G, and H Lines. Even if you can’t attend the Ward One community forum, we encourage you to take the survey by January 20 and let your voice be heard.

Network Next is part of the future vision of transit service in the region, which includes four more lines in mid-term and three more in the long-term planning. This slate of BRT lines follows the METRO A and C Lines which are in operation and the B and D lines which are in the planning phase and have received full funding.   The METRO E Line will begin planning in early 2021. 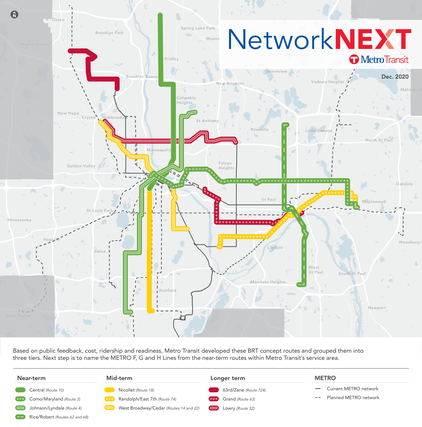 Posted by Marcy-Holmes Staff on ,